By JessicaMay 8, 2018Press
No Comments

Here is the Country Living Article:

WORDS AND STYLING BY HESTER PAGE PHOTOGRAPHS BY NICK CARTER

When Jessica Zoob was looking to move from Brighton after a slower pace of life, the attractive country town of Lewes in the Sussex Downs seemed ideal. “We knew it well, as we have friends who are local,” she says. With a long history as the county seat, a bustling market town and a bridging point over the River Ouse, it has notable landmarks, such as impressive Lewes Castle, built shortly after the Norman invasion, and The 15th- Century Bookshop at one end of the high street, which forms the spine of the town. William Morris described it as “like a box of toys under a great amphitheatre of chalk hills”. The architecture is a jostle of periods and styles, and beyond, on all sides, the Sussex chalk hills can be spotted, smooth and grassy; then, further away still, the sea at Newhaven and Seaford.

When they first saw this 130-year-old house for sale, Jessica, a contemporary impressionist painter, and her two small daughters loved it instantly. It had one room downstairs running from front to back, and two bedrooms above. “It was big enough for three, just a short walk from the high street, and there’s a school opposite,” Jessica remembers. “It’s a perfect house for life here.

Sometimes we had 13 children downstairs for the girls’ tea parties – I wasn’t at all precious about it.” But, over the years, each room has changed identity many times according to the family’s needs.

Next door was a tumbledown garage, which, after they moved in , was converted into a studio for Jessica: “The Den was my haven, my private space.” Then it became a spare bedroom and a sewing room for the girls. “The light is so beautiful in there but, looking back, I don’t know how I managed to work in such a small space,” she remembers. The only way to access it is by taking the ‘narrow way’ from the sitting room– not quite wide enough for a door but just possible to navigate. Because of its size, the most important thing in the house soon became storage. A shop-fitter friend built cupboards in every possible space they could find, cleverly disguised with wooden tongue-and-groove and flat-fronted doors on spring catches.

Furniture, even the coffee table, has also been utilised for stowing items. A bigger doorway from the hall to the sitting room opened up the downstairs space. Jessica wanted the walls to be plastered white and eventually found a woman who could do it, but, as she couldn’t afford to employ her, worked as a plasterer’s mate for three weeks during a freezing cold January to learn the skill for herself. “I’m so pleased I did that,” she says. “It brings the whole house together with a lovely texture that has more life to it than normal, very flat plaster.” Wooden floors were laid throughout to cover concrete, and regular children’s painting parties helped to add layers of colour on them. Over time, skates, rollerblades, scraping chairs and stilettos have added to a more lived-in look.

The sofa below Jessica’s painting Midnight Garden is an unwanted shop fitting  on which sit cushions that have been covered in material designed for Jessica’s collection at Black Edition, while her grandmother’s bedspread covers built-in storage chests with seating. Above hang two artworks that are part of a small collection painted when staying at Monk’s House, Virginia Woolf’s home and now a National Trust property not far from the town, where her sister-in-law Caroline Zoob lived at the time. 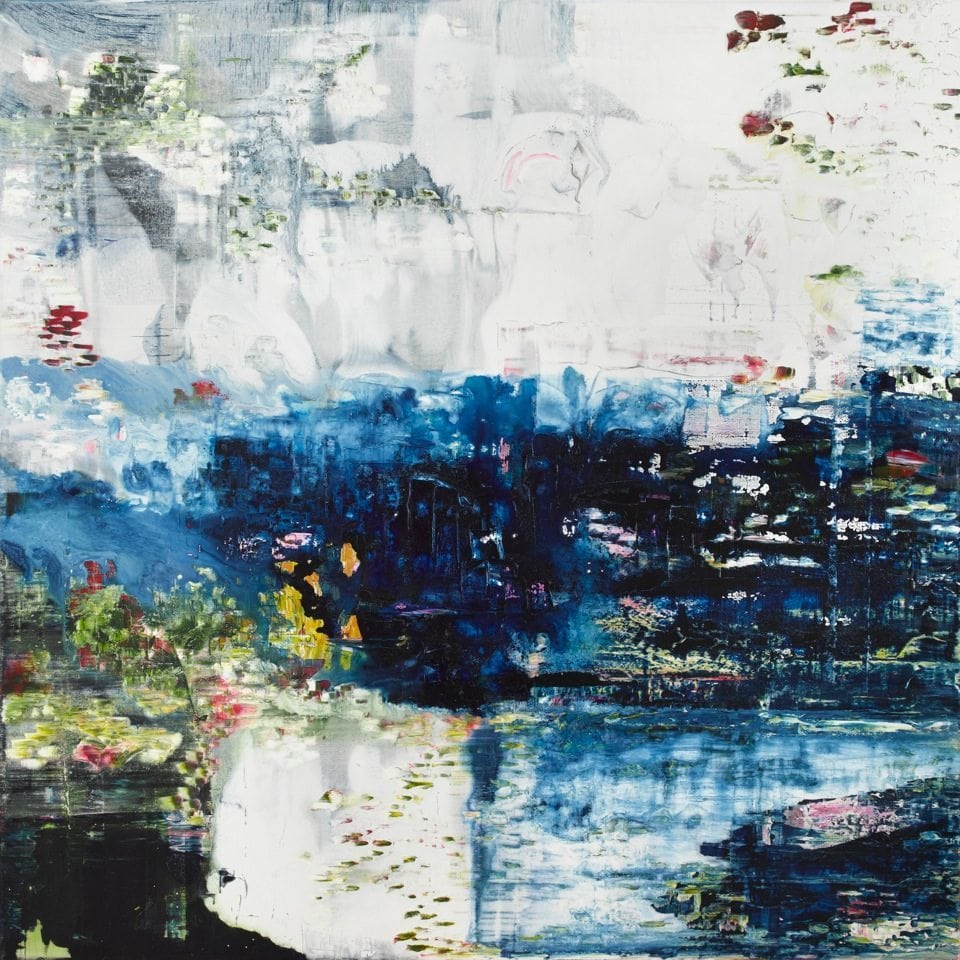 Under the garden window by the kitchen, a foldaway table with a collection of brightly coloured chairs is the main eating area. “It can open up to accommodate more chairs and more people, a little like the house itself–it’s quite remarkable,” Jessica says. “One morning we just decided to each paint a chair, which were flea-market finds.”

Her love of markets and fairs has provided some well-loved pieces, such as an iron candleholder from Ardingly Antiques Fair in Sussex and a large armchair in the living area, which is covered in Jessica’s striking textile for Black Edition. “Driving through Portobello in London one day, we spotted the chair out on the kerb. There was a chorus of ‘Stop, stop, we must have it’,” she laughs. 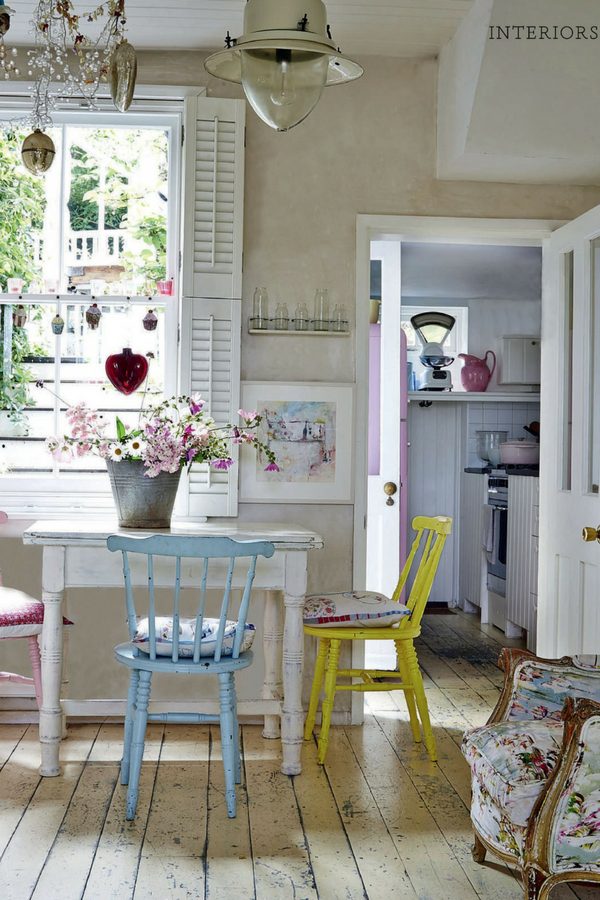 The galley kitchen “is tiny but it works,” Jessica says, “and the garden is the same – there were steps up to a concrete back yard and a rather tragic conifer in a pot when we arrived.” This has been modernised with a wooden sun deck and a small pool surrounded by rambling roses and a variety of climbers to give privacy from the houses beyond the garden gate. 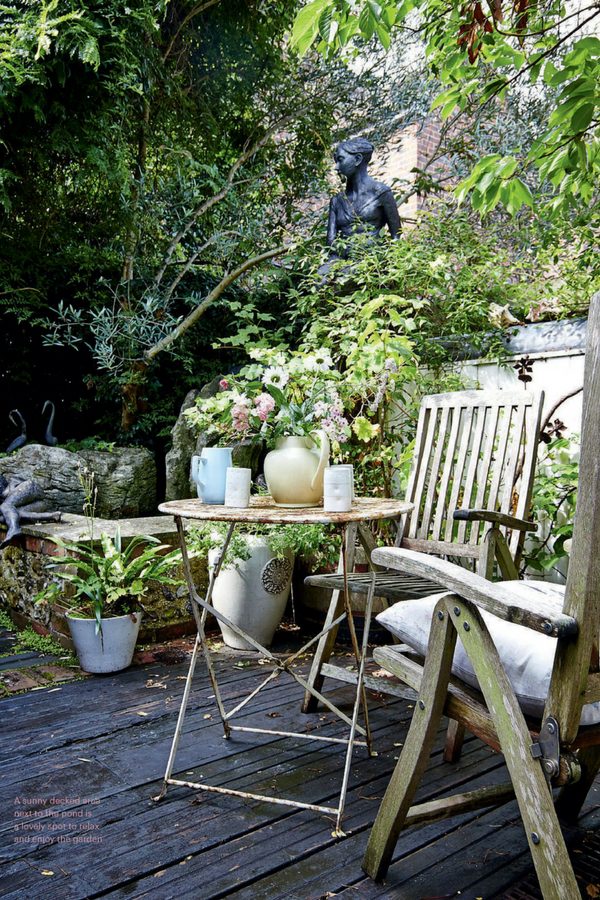 After making a millennium resolution, Jessica started painting in 2000. A former career as a theatre designer had prepared her for working with paint: a library in her parents’ home was converted to a studio, then she trained at Central School of Art and Nottingham University. “Art school taught me to see what was around me,” she explains. “I realised there is beauty everywhere, even in crumbling old walls and peeling posters.” Jessica loves oils because they allow her to play with texture, using layers to achieve the result. Paintings can sometimes take years to complete as she moves from one to another while they dry, and her pictures have grown in size since she acquired a new studio outside Lewes. “They are as big as the space allows me,” she says, “which is thrilling – and it has given me more room at home.” Space to continue to be inspired by her surroundings, no doubt