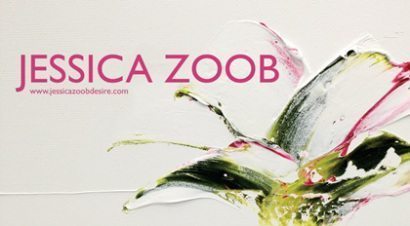 I was was so touched by her piece I wanted to share it with you:

I’ve only been sitting in her living room for five minutes and already I am thinking that I would quite like it if Jessica Zoob was my aunt, or my godmother, or something.

Which is progress, because up until then I had kind of been wondering what on earth possessed me to basically invite myself to the home of someone I don’t know at all and have only occasionally spoken to on Twitter.

And now she’s given me a parking permit, made me a cup of tea and is attempting to ply me with cake. If she’s wondering what on earth possessed me to invite myself to her home, she’s doing a very good job of not showing it. Maybe this is the kind of thing that happens to you all the time, if you’re Jessica Zoob.

Jessica Zoob is a contemporary artist. She exhibits regularly in and around London and has works in private collections worldwide. Recent commissions include works for the entrances of The Lancaster’s Hyde Park, a palace in Dubai and Pavillion C, NEOBankside. One of her paintings was featured in Mary Fox Linton’s roomset at the Wool House exhibition at Somerset House earlier this year. It is slightly embarrassing that I didn’t know any of this when I first “discovered” Jessica, her house featured in the pages of The Wealden Times, our local glossy, aspirational mag, the one I aspire MY house to feature in, if only I ever managed to dust it. I found her on Twitter, then, and found the pictures she often posted to be inspiring; decayed buildings, fungus; she seemed to find beauty in everything and she always seemed so upbeat and happy; a refreshing thing to find on Twitter, to say the least. Then I come across her painting at Wool House and became more intrigued, and we began to communicate a bit…

…And now I am here, in her house, and we are talking properly. Talking about motherhood, as all mothers with a larynx eventually end up doing. It’s no secret that I am at a bit of an emotional crossroads, at the moment, my daughter about to start school, my son following her to the attached pre-school shortly afterwards, my need to reclaim my identity after almost five years of relentless pregnancy, sleep-deprivation, feeding, changing, purées and potty training and the small matter of actually also needing to earn some money, too. And I’m not entirely sure why I am expecting Jessica to have all the answers, but she’s certainly a good few steps ahead of me in the game and has successfully navigated that crossroads herself.

She has two daughters, Ana, 17 and Kat, 14. For the seven years before Ana was born she worked as a theatre designer. It was her passion, what she lived for, and when Ana was born it never occurred to her to stop. Instead, for the whole of Ana’s first year, she travelled and worked, with a nanny and two assistants trailing after her. “We moved house twice, I did seven productions” What? “By the end of that year, I’d lost so much weight, physically and emotionally there wasn’t anything of me left”. Ah.

And that was when she knew something had to change. “But when your whole identity is wrapped up in your work…it was like cutting an arm off. For the “baby years” she did some design work, interior design, fashion design, even some corporate work. Lucrative, but not fulfilling in the way that theatre design had been.

“And then, I wanted to paint. My husband wasn’t that keen, the corporate work had paid well… but I knew I had to do this, I mean, I didn’t know I could make a living out of it then, get an income from it, but I knew I had to do it, and once I started painting again, it made me so happy, and to be a good mum, I needed to be a happy mum”

We talk at length about this need, as a mother, for constant reinvention, shedding old skin, taking new directions. She shrugs, as if it’s the most obvious thing in the world (and of course, it is) “that’s just what women do. And I am so glad to be a mum, it’s such a precious thing, and to be able to do something I love and be there for my children, it’s wonderful”.

Wasn’t it quite difficult, though, making these enormous, time consuming paintings (she works mainly in oils, which are notoriously slow drying), with as many as fifty pictures in various stages of completion at any one time, with two small children around? Jessica doesn’t really seem to understand the word “difficult”. She tells a lovely story about finding Kat, resplendent in a tutu and wellies, sitting in the middle of one of her paintings with her friend next to her running his toy car through the paint and all over himself, talks about how inspiring she finds children and their approach to creating art, their free spiritedness, never about the mess, the waste of materials, the effort involved in juggling work and children. There’s a serendipity about her, a serenity, that once she had found her “thing” in painting, everything else was just going to fall into place, and did.

And her paintings too, are suffused with this serenity, managing to be both intense and calming at once. Very, very many of the creative people I’ve known and worked with have been damaged in some way, it almost seemed to be a part of their creative process, but Jessica is the absolute, diametric opposite of “damaged”. She is, more than anyone I think I have ever met, utterly whole. And her paintings reflect that, wholly.

The annoying thing is, I don’t even find this annoying. I do start to wonder if she’s slipped something in my tea, though, so I press on, trying to find the chink in her armour.

What if you didn’t live somewhere so beautiful and inspiring, then? Would you still be able to paint? Of course she would, she has to paint. She used to live in Charlton, South East London. I know it well. My dad grew up there, my parents’ house has a Charlton Athletic mirror hanging half way up the stairs, as a teenager, one of my boyfriends lived there. She admits her painting was different there, “more industrial, more linear” but that’s all I’m getting.

Wasn’t it hard, creatively, having to fit your painting around the children, having to timetable it, almost, to fit in with school and mealtimes and all the regular order and routine that children need? Not a bit of it. “By the time I actually came to painting, it was such a relief, it all just came tumbling out”.

Any regrets then? (Regrets; everyone’s had a few, right?) She looks at me, slightly surprised. “No”. And then expands “I have two happy, stable, independent, beautiful daughters. No, no regrets”.

Not only is there no chink, there’s not even any armour. This is just Jessica. Totally at ease talking to a stranger who is also, possibly, the worst interviewer she has ever encountered. Wholly whole, serene, completely happy with her lot, doing something she loves, is extraordinarily successful at, raising her children and setting the most awesome example any mother could: Be happy, regret nothing.

What next, then, for Jessica Zoob? It might be tempting to think “if it ain’t broke, don’t fix it” but that’s not in the nature of someone who understands reinvention and skin-shedding. She is, in fact, at her most animated talking about her new projects, a collaboration with Romo to create a fabrics/wallpapers range which launches globally in January; her forthcoming exhibition at Decorex; an experimentation with casting her paintings in resin to produce three-dimensional floor-to-ceiling sculptures of expanded layers and shifting light; another solo show for her latest painting collection, “Dancing With Colour” and – closer to home, much, much, closer to home, in fact – Lewes’ Artwave festival when local artists open their homes to the public to showcase their art, an opportunity, really, to see amazing art actually in its birthplace instead of a gallery, and to meet the artists behind it.

I start to wonder just how we have managed to talk about so much in such a short space of time, and, as Jessica gets up to answer the front door to her painter and decorator, I sneak a look at the time. OH GOD, I’VE TAKEN UP HER ENTIRE MORNING. Faintly horrified, there’s a whirl of thanks and goodbyes and promises to visit again during Artwave and I leg it out of the house quick, before the PR from Decorex, due that afternoon, turns up.

But, I fancy I do it with a little more serenity and self-acceptance than I otherwise might have done. And I wander off into the streets of Lewes, to find the beauty in everything, even on what is a pretty gloomy, overcast day, to practise the art of no-regrets, to remember that to be a good mum I need to be a happy mum.

Be happy; regret nothing.

I am a little bit in love with Jessica Zoob.

Thank you so much for your lovely words  Hannah XX