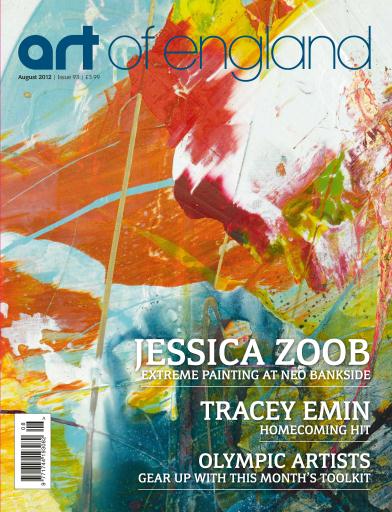 I am loving working on my current collection and sculptures and I so  looking forward to exhibiting my work at Decorex International and the Loughran gallery.

My third interview with the lovely Helen Chislett for Art of England magazine was before my last private view at NEO Bankside exhibiting my Passion Collection in July 2012. 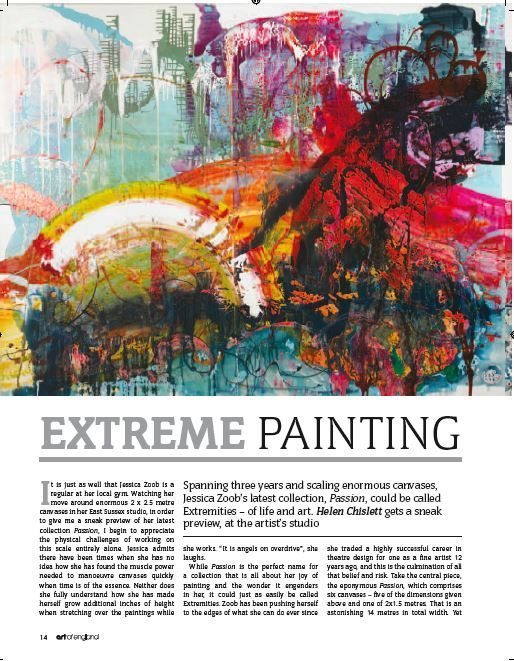 It is just as well that Jessica Zoob is a regular to her local gym. Watching her move around enormous 2 by 2.5 metre canvases in her East Sussex studio, in order to give me a sneak preview of her latest collection Passion, speaks volumes about the physical challenges of working on this scale entirely alone. She admits that there have been times when she has no idea how she has found the muscle power needed to manoeuvre canvases quickly when time is of the essence. Neither does she fully understand how she has made herself grow additional inches of height when stretching over the paintings while she works. “It is angels on overdrive”, she laughs.

While Passion is the perfect name for a collection that is all about her joy of painting and the wonder it engenders in her, it could just as easily be called Extremities. Zoob has been pushing herself to the edge of what she can do ever since she traded a highly successful career in theatre design for one as a fine artist twelve years ago, and this is the culmination of all that belief and risk. Take the central piece, the eponymous Passion, which comprises six canvases – five of the dimensions given above and one of 2 by 1.5 metres. That is an astonishing 14 metres in total width. Yet these are not six entirely stand-alone paintings related by a single theme. In fact each one connects both visually and emotionally to its siblings – one vast work that is divided into six ‘chapters’ and designed to completely encircle the viewer. If Zoob was unhappy with one part of one painting, it was never a question of simply re-working that individual area, but of re-visiting the entire six canvases, often destroying something she had hitherto been happy with in order to raise the entirety of the work to a whole new level. No wonder she is now feeling exhausted and exhilarated in equal measures.

But Passion deserves special attention for another reason. Fans of Zoob’s work will be familiar with her method – layers and layers of paint that are scraped back over weeks, months and years as if she is mining for gold (which in a sense, she is), with the final application of glazes transforming them again in a matter of seconds. The result is often “white on white”, calm and peaceful canvases that give only the barest hint of the unruly bursts of colour under the surface. As she says: “You could X-ray these paintings and you would find a lot of other paintings. Some are my favourite paintings ever, but now they have entirely gone and live only in my head. I don’t regret that – I believe in being brave and in living in the moment, and that is absolutely writ large within these works”.

Indeed it is. The surprise then is that in two of Passion’s canvases, she has allowed the vividity, boldness and sheer energy of colour to burst out unrestrained. It is a shock – the sort that makes your heart race and your mouth go dry, which is exactly how she herself feels when she looks at them. She knows there will be a Marmite reaction – “people will either love them or hate them, it is not the sort of impact you could feel half-hearted about” – but for the record, I think these paintings are the best she has ever produced. Electrifying, elemental and powerful, they are the manifestation of her constant quest to push herself to a whole new level.

Of course like all her work, they are also autobiographical. It has taken her three years to complete this collection and a lot has happened in that time: the end of her marriage, the beginning of another relationship, the illness of someone close to her, a rollercoaster period of the very best and the very worse that life can throw. In Passion, she tells the story of a love affair through the metaphor of seasons: “In Spring, there is wooing and romance and falling in love”, she says, “followed by summer, which celebrates the whole joy and wonderfulness of that. But in autumn it becomes turbulent and stormy, because if a relationship is any good, it will always challenge you. If it survives, you go into a quiet and tranquil place – like winter – and then if you are really lucky you fall in love all over again”. If you think this sounds like some trite Mills and Boon plot, think again. Passion in Zoob’s vocabulary is about being uncompromising, ballsy – even unreasonable. “If something in your life is not right, you have to challenge it”, she says, “you only get one life, after all. The up and down, good and bad, of what has happened to me over the last three years has allowed me explore the edges of what excites and inspires me. It is so easy for any of us to become bogged down in our personal problems, but you either crumble or you get up and fight back – and that is such an exciting thing to do. You have to live in the moment – and sometimes that involves throwing large amounts of white paint over something which was quite lovely before! There are ghosts here – casualties – but that too is life”

The ‘autumn’ of the series is where you can most see the change in tempo. This is the “battle royal” of love and passion, but Zoob sees nothing negative in this: “Even though it speaks of tempests and thunderstorms, it actually makes me incredibly happy. It is a cleansing of what has gone before – you have to fight for what you believe in, and if you survive that, you will find redemption”. At first glance there is something foreboding in these huge arcs of explosive colour, but Zoob sees beyond the obvious interpretation of good and bad: “It is the meeting of light and darkness, a clash of two worlds, but they are equally powerful and perfectly balanced”.

It would be misleading to suggest that all of the paintings in Passion are as violent and raw as this one. In fact there are over 30 paintings in all, some of which push the boundaries in a different direction – as quiet, contemplative and zen as it seems possible to be. This is exactly what Zoob set out to do: “These are my best works of that particular story, the culmination of a theme I have explored many times now. Sometimes I almost don’t breathe when I am working in this way in case I destroy the delicacy of what I have created. It can be absolutely terrifying”. Cevenne Autumn, for example, captures the rocks, lichen and leaves of the landscape near her parent’s house, both through its colours and its surface texture. Still Water, Dancing Lines is like gazing into tranquil water on a warm summer evening, glimpsing the shadows of fish just under the surface.

Although her work is not strictly figurative, there are a few recurring motifs, such as water lilies, these are often painted so thickly, they seem to stand out from the painting as if in three dimensions – as with Quiet Smile. Zoob traces her fascination for these exotic aquatic stars to the trip she made as a student to China and Indonesia: “I remember seeing ones that were as big as dinner plates and in the most wonderful colours. These are not supposed to be true replicas of water lilies, because the petals are formed very differently in fact, but they represent my memories of being very young and travelling the world and being mesmerised by the beautiful things I saw”.

At times, she is astonished herself by what has unwittingly appeared on the canvas as she scrapes and polishes back the layers. In one work there is the ghost of a bird in a nest. In another a strange little bird-like creature struts confidently through a dreamscape. The application of glazes can cause some surprises too – including the almost magical appearance of iridescent, ice-like crystals in the ‘winter’ scene of Passion. “Overpainting with glazes transforms the work completely within a few moments”, she explains, “white in particular obliterates lots of the story underneath. You can see the thickness of the paint, but you can’t see what happened – there are only echoes”. That too she sees as a metaphor for life: “These paintings are like faces – they have their scars and marks and lines – you can’t create them in a moment. What you have to look for are the glimmers under the surface, the stories they can tell”.

Zoob is a firm believer in angels and no wonder: she does seem to have a hot line to her own angelic host. How else to explain the fact that a collection she has spent three years working on has not only found the perfect London venue in which to be exhibited, but fits on the walls to the last centimetre.

Not that all the paintings in Passion demand huge walls. With her love of extremes, she will also be including a handful of miniatures – 15cm square – a taste of her next show, which will be entirely at this scale. “The big paintings are so physically and emotionally demanding that it is lovely to make something you can hold in your hand”, she says, “it is a more intimate and tender process – almost like making a hat. The big works take six to eight months to dry, so it is the perfect moment to begin work on the babies”.

After many months of getting up at 5am and working non-stop until late at night, she is finally able to step back from what she has created and take stock. Even she finds the effect of Passion overwhelming. “It has been such an emotional three years, but I feel this work has got an honesty that I love – as if I have become brave enough to show this part of myself to the world”. So which part of the story does she herself inhabit. “I am right here”, she says, pointing to ‘Spring’, “I have gone full circle, survived all the storms, and feel healed, reinvigorated and very, very lucky.”

If you have enjoyed reading this interview then you do have a read of my previous two interviews with Helen Chislett also in Art of England magazine  Capturing the Rainbow and Cool, Calm and Collected